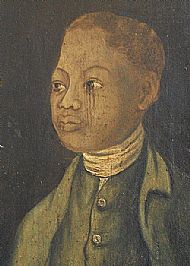 Maggie Ogunbawo has been discussing with the Learning Links International team about researching the story of Jack Ystumllyn and other Black people who were 'in service' in landowning families - as it was fashionable to have Black servants, possibly in respect to the fact the King George had a wife, Queen Charlotte who is reputed to have African heritage.

It seems Jack was brought to Wales as a child, and probably given to the Wynn family in Criccieth. After this difficult and traumatic start in life, it appears he was accepted into the family as a servant and his ife in Wales is well recorded.

From the 'John Ystymllyn' page on Wikipedia:

John was of uncertain origin, possibly a victim of the Atlantic slave trade, and from either West Africa or the West Indies. Early in his life, he was taken by the Wynn family to its Ystumllyn estate in Criccieth, where he was christened, and given the Welsh name John Ystumllyn. Here he was "domesticated", as he was taught English and Welsh by the locals. He learned horticulture and craftsmanship, at which he had some natural skill, in the estate garden. He worked as a gardener at the estate and eventually "grew into a handsome and vigorous young man", with his portrait painted at around this time. Doted upon by several local girls, he began a romance with the local maid Margaret Gruffydd.

As Margaret moved to different employments, Ystumllyn followed her, eventually running away from his job as gardener to marry in 1768. They had seven children, five of whom survived, with several of their descendants still living in the area as of 2019. They initially worked as land stewards, but Ystumllyn eventually re-entered into the employment of the Wynn family. In recognition of his service, Ellis Wynn gave Ystumllyn a large, ancient garden and cottage at Y Nhyra Isa. Ystumllyn died in 1786, with his wife dying in 1828, over forty years later.

Ystumllyn was well-liked in his time, and met with little racial prejudice, though he often encountered surprise and ignorance from locals over his unfamiliar appearance. Several years after his death, a small monument was constructed in his place of burial, St Cynhaearn's Church. Over a hundred years after Ystumllyn's death, the Welsh writer Robert Isaac Jones published an account of Ystumllyn's life, compiled from various local oral records. This work, while also criticised for its "forgetfulness" and "racial stereotyping", serves as "the most informative" extant source of Ystumllyn's life. According to Jones, John Ystumllyn was "a very honest man, with no malice, and was respected by the gentry and the common people alike".